Last weekend I did my first 70.3 at Muskoka. I raced as an Age Group instead of a Pro because I wanted to see what my level is compared to the other competitors. Unfortunately I had a hip injury coming into the race and I almost didn’t run at all during the few weeks preceding the event. A couple of days before the race I tried to run but after only 5 min I had to stop because it was painful. Therefore, I knew I wasn’t gonna be able to run but I still wanted to race to test my swim and bike fitness and experience the 70.3 vibe.

I started the bike fast for the first 10 km to catch a few triathletes and then started thinking about hydration and nutrition. I soon realised that my tt bike handling ability were not good compared to the other athletes and I was loosing time in every downhill. Also, I chose to not ride a disk wheel so I was loosing time in the downhills and the fast flat sections. However, I was able to gain time in the hills and I passed a few 30-35 AG and some Pro Women and Men for the first 60 km. For the last 34 km (it was a 94 km bike course instead of 90 km) I was completely alone and I had no idea if I was gaining time on some of the Pros in front or if I was loosing time. It was a lot harder to be motivated and to keep a steady effort. Because I didn’t think I was gonna be running I neglected my hydration and nutrition for the last few kilometers (I only wanted to have a fast bike time). However, I paid for it in the last few kilometers of the bike and I had a lot of difficulty to climb the last steep hills.

I got off the time and to my surprise, my hip wasn’t hurting. So I decided to continue at a slow pace to hopefully be able to finish. I soon passed the 3rd Pro women and I felt great. I drank a lot of water and Coke to compensate from my lack of hydration/nutrition on the bike. The crowd was simply amazing and I felt an incredible boost. Also, I could see that I was gaining time on some of the Pro Men. After around 10 km my right knee started to hurt, probably because of my lack of running training in the last few weeks. When there was only 7 km left my left calf started to cramp and it was getting worst and worst. However I saw Ed Cyr, one of the Pro Men, who was not far in front of me and managed to make a surge to pass him despite my calf that was really really tight. Only a few minutes after I passed him I could barely run because of my calf and he passed me. For the last 3km it was just a matter of surviving and finishing. I even walked the last steep hill at around 2km from the finish. However, despite my really slow run time I was happy to simply finish the race and to also finish 1st Age Group and 6th overall (really close to the 5th).

Despite my time being really far from the winner Richie Cunningham I know that not injured and properly trained I can finish in the Top 5 and maybe Top 3 in a 70.3. Even though it is not a drafting legal race it is faster when you are in a pack on the swim and on

the bike and when you can race with other competitors on the run. Also, being a fast swimmer I know I can be in the front group on the bike and benefit from someone who sets the pace on the bike. This is why I decided to not take my spot for the 2015 70.3 Age Group World Championship because I will take a Pro license and raced a few 70.3 races as a Pro. I would like to thank Buff Canada who accepted to pay for my 2015 Pro license, which allows me to race as many 70.3s as I want for the same fee. There are a lot of advantages in being a Pro. Indeed, you can register for a race only a few months or weeks before the race, you can compete with the Big Boys of the triathlon World and you are the first wave to start so you don’t have to pass people on the swim and bike which can slow you down.

I am now in my off season, which will allow me to fully recover from my hip injury and to replenish my energy level… without taking too much weight hopefully! 😉 I plan to race earlier next year because I want to race the ITU Long Distance series’ event in Cuba on January 25th, which is a 4 km swim, 120 km bike and 20 km run. The longer swim is good for me and it could give me an edge on the slower swimmer.

Thank you everyone who believed in me, to my parents who made the long trip with me to Muskoka and to my sponsors.

Here are the results from the race:

At the end of this season I will be racing Muskoka 70.3. This will be my first 70.3 race so I decided to race Magog Olympic distance national Championship instead of the Elite race to prepare myself specifically for this event. I wanted to experience biking by myself instead of in a pack like I am used to in ITU triathlons. Also, after my crash at Ixtapa Pan Am Cup where I broke my scaphoid bone in my hand I didn’t feel completely ready to race again in a ITU race; I wanted to give me time to get back to racing and try some longer races.

I had a good swim and started the bike with a lead of roughly 2 minutes. The bike was really hard with all the hills and I had difficulty to pace myself. I went too fast at the beginning of the bike and lost a lot of time in the second half of the bike. My run was ok and I finished 2nd.

I learned a lot of things from this race, especially how to pace myself on the bike and that experience is gonna really useful for Muskoka’s 70.3. I will probably buy a power meter on a crank so that I can know exactly what power I am putting instead of going by feel. 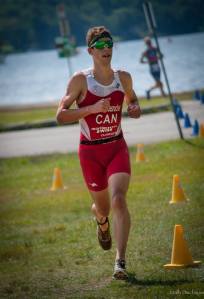 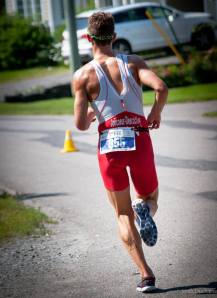 I also raced a 20 km run race to prepare myself to run a half marathon at Muskoka’s 70.3. The course was hilly and part of the course was in trails. I stayed at roughly 20 seconds from the leader during most of the race but couldn’t get to François Jarry who was running really well. He finished really strong and I finished in 2nd place at roughly 1 minute behind the winner in a time of 1:14:04.

It was a good experience and a really fun race, even though I seem to suffer on every pictures! 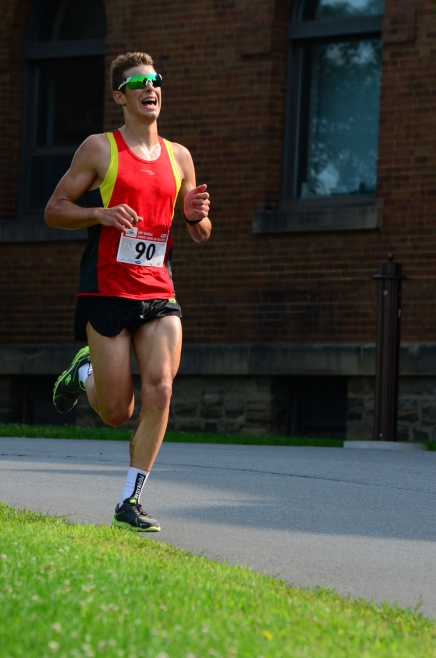 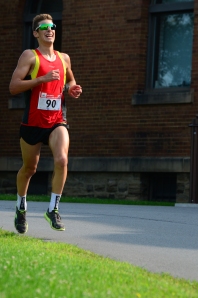 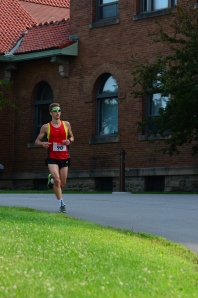 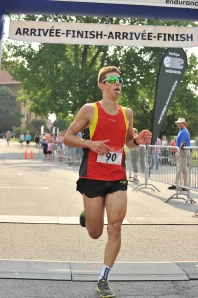 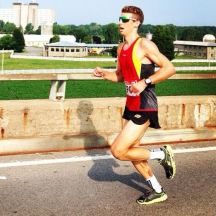 Thanks for your support!

This is what I thought about 3 weeks ago when I crashed at Ixtapa Pan Amercian Cup.

This is how it happened: I exited the water at the front with a lot of Mexicans really close. I went in front hard at the first hill on the bike to test my legs and see if someone wanted to breakaway. I tried again a few times, but they always responded and there were a few other attacks from other people but the pack always responded. The pack was riding pretty slowly, but there were a lot of changes of speed.

At roughly 13 km there was a downhill and I was in front to not be in danger if there was a crash but someone hit my back wheel, really hard. My quick release bended and my back wheel pop out of the frame so there was no way to brake or control my bike. I went over my bike and crashed hard on my left side.

I was really disappointed because my fitness was good and I knew I could have had a good result. Also, the end of my previous season was bad because I crashed at the World Cup in Edmonton and DNF at the Pan American Cup in Puerto Rico so I was really hoping to have a good result.

Here’s a little video of my training before the race and of the race:

The week-end after I raced in Dallas for the Pan American Championships. Even though I only swam twice and rode my bike once before the race, I still felt I could have a good race. However my hand was hurting during the swim and even more on the bike. Also I realized that my wheel was slowing me down; I found out after that even though I got a spoke repaired there was still another problem with my wheel. So, I changed wheel at the wheel stop but I got lapped just after. 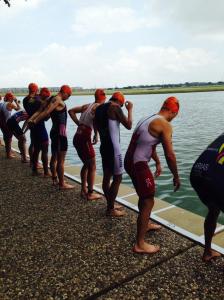 However, after both races I traveled with my family to Las Vegas, hiked in the Grand Canyon and Bryce Canyon and did some mountain biking and rafting in Utah and it was really fun. It was good to do something else for a while and not think too much about my injury. Here’s a little video I did: 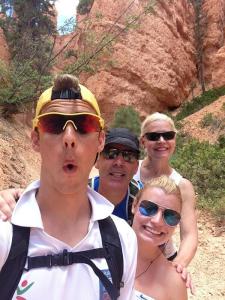 Thanks for you support!

I’m back from 2 weeks in Florida where I trained and raced. I did one week of training before the ITU Sarasota Pan Am and the Real training camp began after the race. 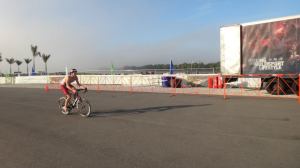 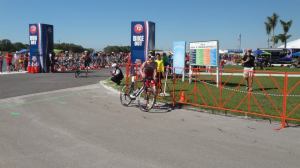 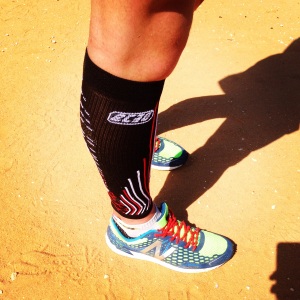 I had a good swim and was 6th at the end of the 750 m of swim (and carnage). My T1 was great and I was 5th at the end of the bike and soon caught we the little group in front of me. However, my bike skills, confidence were really a limiting factor, because I was loosing a couple of meters at every corner and at to push really hard after every corner to catch back the group and I was dropped out of the first group after the first lap and rode alone for the second lap. I definitely made a tactical error there because I pushed way to hard riding alone so that when the second pack caught me I lost the pack in a corner and couldn’t catch back after. So I rode the last lap alone… Again! I ended the 20 km bike segment far back and ran ok. I was obviously disappointed because I knew that with the swim I had, I could have had a really good result. However, I learned a lot of things from this race and it is actually a confidence booster because I know I can swim with the best triathletes, so at least I have one third of a triathlon figured out! I just need to work on my bike skills!

The following day, we did a triathlon relay in team of 4 and it was a great experience!

This is only the beginning of a long and fun season, so now it’s back to training in Quebec and school until the next race: Ixtapa Pan Am Cup! Can’t wait!

Thank you for your support /

By using the code: BIRDTRI (for my nickname BirdMan or The Bird) you can have a 25 % discount on Kronobar when you buy kronobar products on: http://www.kronobar.com.